Pacific Merchants’ Own Mason Cash on The Martha Stewart Show 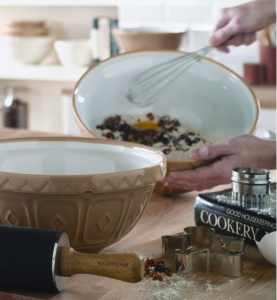 We’re so excited to announce that tomorrow, December 8 2010, Pacific Merchants will be on The Martha Stewart Show! Martha will be showcasing our 12 inch white and cane glazed earthenware Mason Cash mixing bowl, as well as giving a bowl to each member of her studio audience.

The show will air live on the Hallmark Channel at 10 a.m. eastern December 8th, with encore airings at 4 and 5 p.m. eastern. Martha Stewart is the quintessential homemaker, often noted for her list of “good things” that she shares with her readers and viewers via her company, Martha Stewart Omnimedia, and their multiple media outlets.

Stewart has often displayed Mason Cash bowls on the shelves of her set. We feel that Mason Cash represents a return to fundamentals: kitchen essentials crafted with pride, and meant to last a lifetime, and are immensely pleased to see some of our favorite tools on one of the best home shows around.

For more information on Mason Cash‘s beautiful bowls, as well as their many other kitchen tools, visit Pacific Merchants’ website or become our fan on Facebook!

This entry was posted on Tuesday, December 7th, 2010 at 5:13 pm and is filed under Mason Cash. You can follow any responses to this entry through the RSS 2.0 feed. Both comments and pings are currently closed.