Tomatoes are no longer just a salad bar garnish. With such a huge variety of heirloom tomatoes available, especially in August and September, tomatoes are quickly on their way to becoming the star of the dinner table.  Magazines from Food and Wine to Martha Stewart Living have featured tomatoes on their August covers, and we’re taking inspiration both from them and from the colorful heirloom tomatoes at our local farmer’s market. For the next two weeks, we’ll be showing off beautiful, versatile tomatoes.

Here are some quick tips to buying and storing tomatoes.  It’s the height of the season, so making sure to pick the right ones and keep them fresh and flavorful is key.

We’re starting off with a beautiful raw presentation in one of our Acaciaware salad bowls. This rustic Panzanella Heirloom Tomato salad is hearty enough to be a meal all on its own. It also makes a wonderful accompaniment to grilled chicken and steak.  The keys to making this salad perfect are picking great tomatoes, leaving the bread out until the very end, and using a big enough bowl that all the tomatoes, bread, and cucumbers end up doused in that rich, garlicky dressing. We suggest our 12” Calabash bowl. The rich tones of the acacia wood set off the colorful tomatoes nicely, and the bowl doesn’t absorb odors from the rich, garlic-infused dressing. 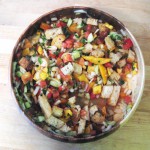 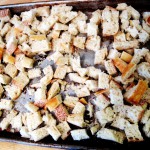 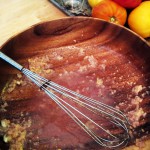 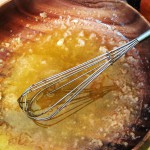 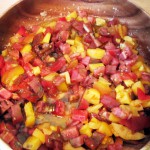 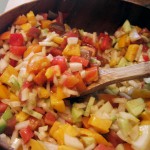 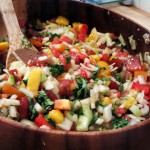 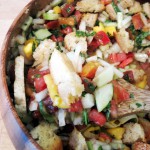 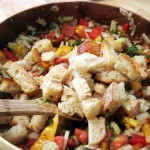 We hope that this beautiful panzanella salad inspires you to get out there and experiment with the best that the season has to offer.  Make sure to check back next week when we put our Kilner jars to work and teach you how to make and preserve the perfect tomato sauce you’ll be sure to enjoy all year long! 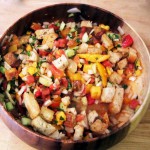 This entry was posted on Friday, August 9th, 2013 at 10:26 am and is filed under Acaciaware, General, Pacific Merchants, Recipes. You can follow any responses to this entry through the RSS 2.0 feed. Both comments and pings are currently closed.